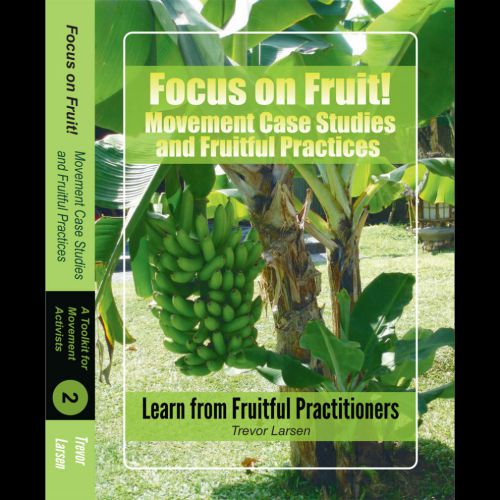 Focus on Fruit! Movement Case Studies and Fruitful Practices (2018) is an unpublished book by Trevor Larson. It presents DMM case studies from the lens of twelve “fruitful practices.” The case studies come out of one particular Muslim country and are shared by national believers of that country.

The movements fall under the DMM umbrella as they include Discovery Bible Studies and finding persons of peace. The DMM methods have been largely adapted to this particular context and contain several unique features. One is “inner healing,” which the book mentions over forty times. This is meant to indicate the importance of the spiritual and emotional health of those in the movement. Another unique feature is a very specific organizational structure of the “groups” of believers in the movement. In this structure, each “group” has five believers. Seven to ten such groups form a “cluster.” Several clusters within a 20km radius form a small region. Several small regions then form larger regions. A third unique feature is an adaption of DMM terminology and methodology. Persons of peace are often called “key persons” and Discovery Bible Studies use a 7-Question Model.

The book leans very strongly on movement methodology. While an attentive reader can understand the case studies to some extent, it seems like they would need to experience them to fully grasp them—just like reading a recipe becomes clearer when actually preparing the dish. There are numerous new terms in this method such as the five-finger model, egg charts, the two-rail model, the Jethro Principle, power men, transfer zones, and transformation dialogues. All of these concepts are simple, but you do need to get familiar with the methodology.

Also related to terminology, the case studies reveal that the terms used within the movements are neutral and secular. Instead of words like church, Christian, and disciple, they use leader, training, group, cluster, coach, and mentor. It was stated that this was for security reasons, although I also suspect that the use of non-Christian-sounding terms makes Muslims more receptive and responsive to the message.

While the book seeks to hide the identity of the locations, names of leaders, and people groups for security reasons, the country in view is actually quite clear since the currency is mentioned once and a picture of the MTR of a particular city in that country is displayed. I don’t know if these clues were intentional or an oversight.

As for a critique of the book, the testimonies of the believers and the desire to get the gospel to surrounding people groups were encouraging. Regarding methodology, the same critiques of DMM methods should apply here, namely the person of peace and discovery Bible studies. Also questionable was their definition of church. In chapter five, Larson wrote, “We think of biblical ‘church’ as believer communities linked to each other by the Spirit in a mosaic” (Kindle Location 2639). In the conclusion, Larson stated, “Movements need a different answer to the question, ‘What is church?’ as compared to how conventional churches answer it. It must be both a thoroughly biblical model of church, and one that can survive and thrive, adapting to the social organization and questions about believer community that arise in UPGs.” The “thoroughly biblical” part, however, was not as convincing. They did practice baptism and there was one mention of communion, although it seemed to have occurred in certain leaders’ gatherings.

The movement leadership structure was a bit odd. Cluster leaders had to have the qualifications of elders from Titus 1 and 1 Timothy 3. However, cluster leaders are only the second level of leaders. Above them are two or three higher levels, who presumably also have to meet the qualifications of elders. However, one of the top leaders was a lady. This movement structure was hierarchical and in keeping with the Jethro Principle of Exodus 18. There was no mention of church discipline and what occurs in each individual “group”—other than Discovery Bible Studies—was not given in detail. Teaching was downplayed and it was very apparent that knowledge and training of their specific methodology (“egg management,” etc.) was much more important to the movement than biblical teaching or knowledge.

I was also left wondering how much of their Muslim identity the believers retained. While the word “Christian” was used throughout the book, at least one man was only willing to trust in Christ if he did not have to attend a “Christian” church or be known publicly as a “Christian.” Another believer retained his identity as a Muslim since “Muslim” means “one who submits to God.” A third believer maintained practicing traditional Muslim rote prayer (but her character and attitude had undergone significant change, it was said). The book did not mention whether believers in the movements continued to go to mosques, take pilgrimages, or perform the Muslim fast. I don’t want to make assumptions, but it would be helpful to have some clarification on these issues.

Regarding the book itself, it was clean and largely free from spelling or grammar issues, something I find problematic in other unpublished books. However, the big exception to that was that the author’s name was spelled in two different ways—”Larsen” in the copyright and “Larson” elsewhere. Another issue was that it was unclear at times who was speaking due to a large number of inserts and commentary into the case studies. Perhaps the print edition is clearer in this regard.

All in all, Focus on Fruit! provides clear case studies of DMM methodology applied to a Muslim context. The methods seem to be “working” in its context, but the issues of ecclesiology, church leadership, finding persons of peace, and Discovery Bible Studies remain questionable and not as “thoroughly biblical” as Larson would like them to be.

How Many CPM Critics Can You Name?

Subscribe by email to receive notifications of new posts and resources. Unsubscribe anytime.