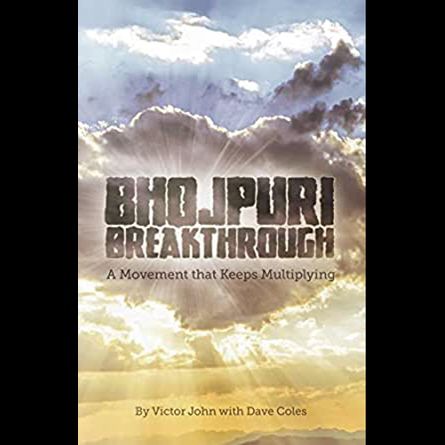 Bhojpuri Breakthrough: A Movement that Keeps Multiplying (WIGTake, 2019) is a case study of a movement (or movements, plural) in northern India. You can gain insight into the characteristics and methods of this movement as well as the Indian culture (or cultures) in this region. I personally learned more about the caste system, railway children, and differences in urban and rural India. I was encouraged by the testimonies of many of the Indian believers and I valued hearing how community development was being used as a means to gain access to unreached areas. I’m glad that many Indians in northern India now know Jesus.

As for a CPM critique, it’s noteworthy that it is published by WIGTake, the same publisher that published T4T: A Discipleship Revolution (Smith and Kai), Church Planting Movements (Garrison), and A Wind in the House of Islam (Garrison). Thus, it has a strong movements theme and is used as an example of the sustainability of movements. (Critics have often said that movements die out and that believers and churches can’t be found in areas where a movement purportedly took place.) Not so with the Bhojpuri movement.

The methods and principles used in this movement include visionary leadership, using community development to gain access to unreached places, empowering local leaders, prayer, evangelism (especially among one’s social network), contextualization into the Bhojpuri culture, finding persons of peace, intentional church planting, and obedience-based discipleship from the Word. Chapter 12 is dedicated to these “principles that guide the movement,” but it does not include certain elements I listed here which took prominence in the book. Chapter 12 also includes some additional principles that the book did not speak much of (for example, “sensitivity toward other religions”). Discovery Bible Studies (DBS) were mentioned some five times but were not a big theme. This could be because the Bhojpuri movement started in the 1990s and before the contemporary emphasis on DBS.

While the book does not explicitly state it, it is apparent that one of the keys to the movement is the visionary leadership of Victor John. This in and of itself does not invalidate the movement since God uses people in carrying out His will. It does, however, strongly point to the importance of vision and leadership to the success of the movement. In fact, the word “vision” was used over forty times in the book to refer to a vision for ministry or outreach—and not the “dreams and visions” kind of vision. I find it interesting that movement methodology places such a strong emphasis on vision while Scripture says so little about it as an essential leadership quality or key to the expansion of the kingdom (and no, Proverbs 29:18 is not talking about this type of vision).

Since the book presents a big picture of the movement, it is difficult to determine how the events unfolded in detail. You might read that a community learning center was started in one area and then that a number of churches were formed in that area, but you don’t know the process, how A lead to B. The book does not state a definition of a church or what goes on in their gatherings in detail. It did mention that churches “normally have multiple elders” (p. 214), but it’s unclear how this is possible because earlier it was said that the movement “had around 150 fellowships among the Awadhi, each consisting of at least five to seven believers” (p. 150). (In context, “fellowships” meant churches since they said that these fellowships did not use “special church buildings” and that church multiplication had taken place “up to 10 generations” (p. 150).) I suspect that in the early stages, the churches were smaller but now have grown larger.

Complementarians would have trouble with the leadership structure of the movement since there is no distinction between males and females. The head of their organization is female. Also, statements such as “we have no problem with appointing women as leaders in the church” and “we have one low-caste woman who leads a worshiping community on the low-caste side of the village” illustrate this. Despite telling leaders, “Don’t just believe what I say; check in the Bible and recheck to see if it’s biblical” (p. 195), this doesn’t seem to apply to the qualifications of church leadership (e.g., 1 Tim. 2, Titus 1, 1 Cor. 14:35).

Probably the biggest criticism of the book is its overly positive portrayal of the movement. Perhaps Victor John is an eternal optimist and persuasive visionary or he and Dave Coles intentionally left out much of the negatives. It’s a bit like the feeling you get when a salesman is trying to sell you a used car—you know there’s got to be something wrong with it! There are numerous extraordinary stories of healing and deliverance (forms of the words “heal” and deliverance” occur over 60 times), but little realism to balance it out. (This doesn’t mean those miracles didn’t occur.) Leaders were said to spend three to five hours a day in prayer, but this wasn’t qualified. Most readers assume that this means solitary prayer alone with God in the prayer closet. But is that what the authors are saying, or does this also mean praying in one’s heart as one goes about one’s day? And how about this for a positive statement: “We have a continuous flow of emerging leaders; not the same people receiving the same training year after year. And practically everyone who has partnered with us has been happy, healthy and successful” (p. 187). Really? This is the tone and message of the book. The “setbacks” mentioned are very mild: people wanting financial assistance, leaders being enticed with money, leaders no longer engaged in the movement because they were too successful, and church people who relocated to other areas. Where about the cases of apostasy, strife, conflict among leaders, believers being hurt by the movement, false teaching in any of the churches, churches closing, or people not being healed? While it is theoretically possible these didn’t take place, it seems more likely there’s more to the story to be told.

After checking out this resource, please come back and rate it.

What was the rationale for your rating?

Subscribe by email to receive notifications of new posts and resources. Unsubscribe anytime.